To improve atmospheric and oceanographic monitoring, a new type of autonomous marine vehicle, the Saildrone, has been developed and deployed in over 40 cruises from which data are publicly available. Remotely directed using Iridium satellites, Saildrones follow a dynamically adjusted path to collect data above, at, and below the surface of the ocean using a suite of instruments. These data complement data already available from instruments such as satellite-based sensors, moored buoys, and wave gliders (subsurface observations) by offering adaptive sampling of the marine environment. 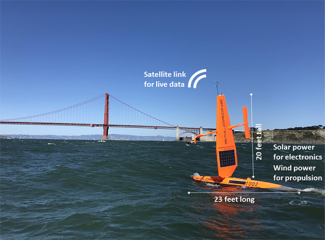 Saildrone vehicles are wind-powered for their propulsion and have solar-powered meteorological and oceanographic sensors, enabling long-range data collecting missions. Vehicles are 7 m long, have a 5 m-tall hard wing, and a keel with a 2.5 m draft. They travel at an average speed of 1.25 m/s. Instruments are mounted on the top and bottom of the hull, the keel, and the upright wing. The study by Gentemann et al. describes a data-collection mission in 2018 in which a Saildrone vehicle traveled from San Francisco Bay, southward along the coast of California and Baja California, and returned to San Francisco Bay on an offshore path. The vehicle carried 16 science-grade sensors to measure atmospheric pressure, air temperature and humidity, wind speed and direction, temperature, salinity, chlorophyll fluorescence, colored dissolved organic matter fluorescence, red backscatter, dissolved oxygen, and upper-ocean 3D velocities. The sensors were connected to onboard computers and transmitted data in real time via satellite connectivity. Gentemann et al. present validation of the Saildrone observations and a few interesting science highlights.

Using measurements from moored buoys, satellite observations, and model results, authors of the study validated measurements of sea surface temperature (SST), air temperature, salinity, chlorophyll, and wind vectors collected by the Saildrone during the mission. In turn, data collected by Saildrone were used to validate SST, sea surface salinity, and wind data provided by satellites. Chlorophyll fluorescence was found to have less agreement in data collected by Saildrone and satellites.

Additionally, the Saildrone mission was used to investigate how the vehicles might be used to explore oceanographic features and processes such as river plume fronts, upper-ocean diurnal warming, upper-ocean currents, and air-sea heat flux that are not easily measured due to deficiencies in other technologies. The vehicle’s mobility and instrument assemblage onboard provided simultaneous observations of the atmosphere and surface and subsurface ocean and gave detailed measurements of the San Francisco Bay plume, upper-ocean current flow, and fine-scale heat and moisture fluxes between the upper ocean and lower atmosphere. These data will also facilitate advanced model development for diurnal warming events.

This data collection cruise successfully demonstrated instrument accuracy and showed that coupled with data from other sources such as satellites, Saildrone measurements could be useful for future algorithm and numerical model improvements, particularly at the fine spatial scale and in complex and previously data-sparse ocean regions.