Tropical expansion, as defined by widening of the Hadley cells, is one of the most important dynamical aspects of human-induced climate change. Widening of the tropics is associated with a movement of rain bands and an expansion of subtropical deserts. The Hadley cells end when the zonally averaged mass streamfunction reaches zero.  The outer edges of the Hadley cells are associated with many fundamental climate features, including the powerful subtropical jet streams aloft, transitions from surface easterlies in the tropics to midlatitude surface westerlies, and the edges of the eddy-driven Ferrel Cells. 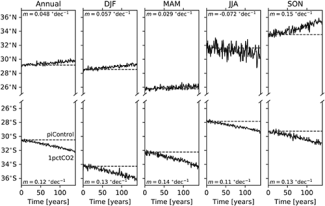 The Hadley cell has already widened in both hemispheres (Grise et al. 2019) and expansion is predicted to continue into the future as global temperatures continue to rise. Attribution of past widening in the Southern Hemisphere is confounded by ozone depletion, which has caused a large fraction of the expansion in austral summer. In the Northern Hemisphere, air pollution and natural sea surface temperature variability have likely contributed to the widening, as has global warming.

We showed that patterns of ocean temperature change, including delayed warming over the Southern Ocean, contributed to some of the asymmetry between north and south. This was not the only factor involved; analysis of simulations with prescribed, globally uniform warming also showed more tropical expansion in the Southern Hemisphere, contributing even more to the asymmetry.

Our work identifying the particularly strong proclivity of the Southern Hemisphere towards tropical expansion should help us interpret future changes in circulation, driven by global and local temperature changes, ozone recovery, and changes in air pollution.