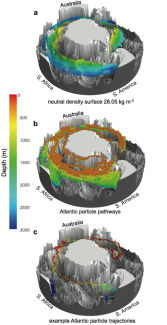 Click to enlarge
Three-dimensional pathways of deep water upwelling from the Atlantic Ocean (color; depth in m) over Southern Ocean topography (grey). Panel a) shows the depth of the relatively warm signature of Atlantic deep water spiraling southward and upward toward Antarctica in an ocean model, b) shows the pathways from virtual floats tracked in an ocean model, and c) shows two examples of virtual float trajectories upwelling from the eastern and western Atlantic to the sea surface.

A team of researchers tracked upwelling by releasing virtual floats in the deep ocean in three models, tracking the path they follow to the surface of the Southern Ocean, and compared this to hydrographic observations. It was previously thought that deep water upwelled to the ocean surface broadly all the way around Antarctica. This new study shows that deep water is carried to the Southern Ocean in deep, narrow currents, which meet in the Antarctic Circumpolar Current. Most of the deep currents were already well known, but a new pathway was identified carrying deep water from the Indian Ocean to the Southern Ocean along the southern coast of Australia. The deep water spirals southward toward Antarctica and up to the surface with the help of topographic obstacles: undersea ridges and mountains that create hotspots of swirling eddies, which push water southward and up toward the surface. There are five of these major upwelling hotspots associated with large undersea topographic features, which are responsible for most of the upwelling in the Southern Ocean.

These results have identified critical regions for upwelling of deep water, which should be targeted with future research expeditions. The researchers have also shown how the role of ocean eddy hotspots can create chimneys connecting the deep ocean with the surface, where the ocean interacts directly with the atmosphere. Three-dimensional modeling of ocean circulation and eddy hotspots is crucial for understanding the ocean’s ability to absorb heat and carbon dioxide from the atmosphere.