Estimating the amplitude of low-frequency Atlantic meridional overturning circulation (AMOC) variability in observations is very important given its potentially profound climate impacts. Currently, the longest available direct observation of AMOC is from the RAPID program since 2004. Hence a direct estimate of the amplitude of low-frequency AMOC variability is not yet available. In addition, the Atlantic multidecadal variability (AMV), a large-scale mode of multidecadal variability in the Atlantic Ocean, also has many important regional and global-scale climate impacts. Previous studies showed that the simulated correlations between the AMOC and the AMV sea surface temperature signal in fully coupled models are not robust and vary substantially across models, challenging our understanding of the role of AMOC in AMV and its associated climate impacts in the real world. A natural question is whether the diverse linkages between the AMOC and the AMV sea surface temperature signal in different models are related to the simulated amplitudes of low-frequency AMOC variability. 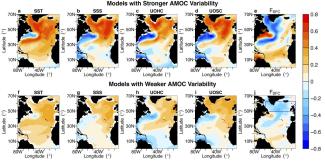 This study provides a new perspective for understanding the important role of the AMOC in AMV and associated impacts and predictability. The results indicate that the linkages between the AMOC and AMV, as well as associated climate impacts and Atlantic decadal predictability, could be substantially hampered in models due to their underestimation of the amplitude of low-frequency AMOC variability. Identifying the limitations of models in simulating the low-frequency AMOC variability is helpful to understand and resolve the diverse linkages between the AMOC and AMV in multiple models.