By the late 21st century, climate models project that sea level will rise up to a foot higher than the global average along the northeast US coastline, resulting in a dramatic increase in regional coastal flood risk. This regionally enhanced projection of sea level rise has often been related to a decline in the Atlantic meridional overturning circulation (AMOC). However, coastal sea level variability observed by tide gauges over the last few decades has been driven almost entirely by local winds. 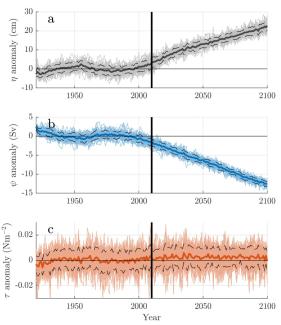 A new study, published in Journal of Geophysical Research-Oceans, helps clarify how past and future coastal sea level changes are related to local winds and large-scale ocean circulation. The study used the Community Earth System Model Large Ensemble (CESM-LENS) to assess both natural and forced (associated with greenhouse gas and aerosol emissions) sea level change. The study first evaluated the CESM-LENS' representation of 1920-2010 coastal sea level with a novel fully-Bayesian reconstruction of 20th century tide gauge data, finding good model-data agreement along the northeast US coast. Using 40 simulations of the 1920-2100 climate (Figure), the study found that northeast US sea level changes can be partitioned into: (1) an interannual, internal, locally wind-driven component and (2) a multidecadal-to-centennial component that is associated with external forcing and the overturning circulation. A ‘‘crossover timescale’’ of approximately 5–15 years partitions a local wind-driven regime from an overturning-related regime. The researchers found that as external forcing increases in strength over the 21st century, sea level variability associated with the overturning circulation becomes dominant.

The study demonstrates that observation-based interpretations, highlighting the role of winds in past regional sea level variability, are not inconsistent with the dominance of AMOC-associated changes in the 21st century. The results also highlight coastal regions that are well-represented in current generation climate models (and those that are not) and the time periods over which coastal sea level may be used as a proxy for the large-scale ocean circulation.