Simultaneous heavy precipitation (i.e., intense precipitation on the land that has been recorded by a significant number of stations over a given duration) over a region creates rapid inundation and significant risk of flooding. It imposes a threat to socioeconomic and environmental conditions by causing severe damage to interconnected infrastructure systems and suspension of services over extended territories. According to the NOAA/National Centers for Environmental Information billion-dollar weather and climate disasters catalog, in 2018 there were 12 storms that occurred across the United States that caused $64 billion damages. The damages amounted to 70% of total losses associated with all of the billion-dollar disasters that occurred throughout the United States in 2018. Identifying the ground footprint of extreme precipitation events and modeling its spatial risk using large-scale atmospheric processes would be of immense value for determining the probability of a specific region -where and when- undergoing a high risk of inundation and sudden deluge. It has benefits in terms of better management of the infrastructure systems and reducing the risk to the society. 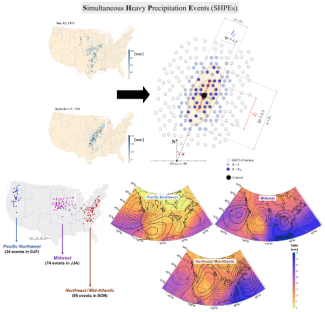 Top: Spatial distribution of two widespread precipitation events that occurred on 8 May 1995 and 13 September 1961 (left), and geometric illustration of the extent of an SHPE on the ground (right). Bottom: Composite analysis of the locations of the SHPEs in four DJF, MAM, JJA, SON seasons (left) based on the geopotential height and precipitable water vapor anomalies (right) (click image to enlarge).

In a recent Journal of Geophysical Research – Atmospheres paper, Najibi, Devineni, and co-authors presented a new approach to quantify extreme regional precipitation considering the spatial structure of extreme events. Defined as simultaneous heavy precipitation events (SHPEs), they measure the central location, spatial extent, and widespread heavy rains' orientation on the ground. SHPEs are used in the study to understand whether extreme precipitation has a spatial organization manifested as specified tracks or contiguous fields with inherent scaling relationships. The spatial distribution of the centroids and principal axes of SHPEs and their quasi-elliptical manifestations, azimuthal orientations, and areal extents on the ground were quantified. Four seasons, December-January-February (DJF), March-April-May (MAM), June-July August (JJA), and September-October-November (SON), are considered to examine the spatial patterns and associated large-scale atmospheric circulations. Power laws explain SHPEs' underlying area scaling behavior in all four seasons. Quantifying the characteristics of SHPEs and modeling their footprints can improve the projections of flood risk and understanding of damages to interconnected infrastructure systems. The framework and findings presented in this study can help develop improved flood risk management strategies by public/private planners and agencies.

In addition, an SHPE database was created using ground-based precipitation observations recorded by the daily Global Historical Climatology Network (GHCN-D) across the conterminous United States during 1900–2014. The database can be used by those working on extreme events to explore new research avenues such as prediction of large river floods’ spatial extent, whether the current generation of global circulation models adequately represents the spatial features depicted in ground-based measurements, and how the models could be improved to better describe these spatial features.