Subseasonal to seasonal climate forecasts for the United States depend heavily on atmospheric and oceanic conditions in the tropical Indian and Pacific Ocean regions. While ENSO dominates seasonal predictability, the primary source of global predictability on subseasonal timescales is the Madden-Julian Oscillation (MJO), a convectively coupled, eastward propagating system confined to the tropical Indo-Pacific. The deep convection of the MJO active phase makes a global footprint, forcing quasi-stationary Rossby waves to propagate from the tropics to the extratropics. 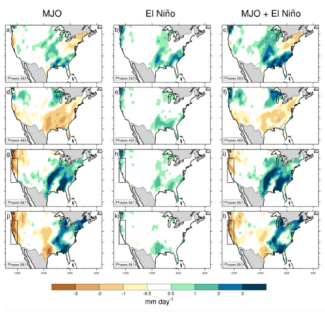 Composites of NOAA Climate Prediction Center precipitation in mm day<sup>-1</sup> broken down by MJO phase for active MJO days for the November 2015 - April 2016 El Niño event. The plot shows MJO-only rain, ENSO-only rain, and MJO + ENSO rain. The left column shows the daily anomaly data with the seasonal cycle and 120-day running mean removed, the center column shows the anomalous 120-day running mean only, and the right column shows the seasonal cycle removed only. Black boxes denote prominent areas of constructive or destructive interference. Phases in the lower left corner are based on the longitude of deep convection associated with the eastward propagating MJO, starting in the Indian Ocean and ending near the International Dateline (click image to enlarge).

ENSO modulates the background through which the MJO is travelling, further complicating the MJO teleconnection patterns. ENSO and the MJO differ in their dynamic mechanisms: the MJO is a propagating system operating on a 30-60 day timescale, while ENSO is stationary and fluctuates every 2-7 years. This affects not only the strength and propagation of the MJO directly, but also its extratropical impacts, particularly on US precipitation.

To understand how ENSO and MJO interact, the authors isolated both the MJO and ENSO signals from the raw data. First, daily anomalies (deviation from the daily mean) are obtained by subtracting the long-term average precipitation for each day. The ENSO signal is captured by calculating a 120-day centered running mean of the anomalies and then subtracted. The MJO signal is lastly filtered using an applied statistical technique known as multivariate empirical orthogonal function (EOF) analysis and broken down into eight phases based on the longitude of deep convection. Thus, the MJO signal is isolated from higher and lower frequency variability and the precipitation associated with the MJO is composited based on phase. The ENSO signal that was removed from the MJO data (the 120-day centered running mean) is separately composited, but also broken down into MJO phases to directly compare the remote response from each forcing. The anomalous precipitation patterns from the two signals are also summed to show the signal interference between the MJO and ENSO.

Depending on the simultaneous location of the MJO convection and the background state of ENSO (El Niño, La Niña, or neutral), the two signals can either considerably enhance or mask each other. For example, a combination of both the ENSO signal not bringing the expected rainfall and destructive interference with the MJO signal contributed to the negative rainfall anomalies in Southern California during the winter of 2015-16 (see figure). Furthermore, case studies of ENSO events show that constructive interference of the MJO and ENSO signals has played a role in past extreme drought and flooding events, such as massive flooding in the Mississippi River basin in December 2015 during a simultaneous El Niño event and active MJO. An understanding of the concurrent teleconnection signals from the MJO and ENSO can increase confidence in subseasonal and seasonal forecasts and produce longer lead times for forecasts of extreme events.

Rosentiel School of Marine and Atmospheric Science, University of Miami