The social and economic consequences of drought make it extremely important to understand the frequency and severity of reoccurring drought events. Paleoclimate evidence indicates that droughts much worse than any seen during the 20th century – often classified as megadroughts – occur with some regularity. The causes of these megadroughts are not fully understood nor can coupled climate models accurately represent their properties. Previous work has demonstrated the importance of internal atmospheric variability, coupled influences from the El Niño-Southern Oscillation (ENSO) and Atlantic Multidecadal Oscillation (AMO), and external climate forcings on megadroughts. But the question still remains as to the relative importance of all of these factors. 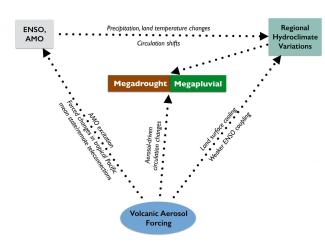 In a recent paper published in the Journal of Climate, Stevenson et al. quantified the influences of ENSO and AMO, as well as volcanic eruptions, on megadroughts using the Community Earth System Model Last Millennium Ensemble (CESM LME). The LME contains over 30,000 years of model output, so despite the fact that megadroughts occur only one or two times per century, statistical relationships between their properties and climate variability may be robustly computed. The amplitude of ENSO strongly influences both the overall risk of megadrought occurrence and the persistence of megadrought events in several arid regions, including the southwestern United States, Australia, Mexico, and Southeast Asia. A stronger ENSO – meaning there is an enhanced tendency for switching between strong El Niño and La Niña conditions – favors the termination and initiation of megadrought events in teleconnected regions. The effect of external forcing is small over the last millennium, although volcanic eruptions can affect megadroughts via changing the amplitude of the AMO and the structure of ENSO and AMO teleconnections.

This study provides the first quantification of the relation between megadroughts, climate variability, and volcanism. The results indicate that in order to improve estimates of risks associated with drought in climate models, we will need to improve understanding of ENSO/AMO behavior, their teleconnections, and their response to volcanic eruptions.