A recent study published in the Journal of Geophysical Research-Oceans highlights results obtained from an aircraft ocean survey that targeted a large warm core eddy (WCE) in the eastern Caribbean Sea. The purpose of the scientific mission was to measure vertical ocean temperature, salinity, and current structure to understand the upper ocean characteristics of the eddy and its surrounding waters, as such measurements were previously absent from the literature. Upper ocean measurements are crucial to understanding the complexities of heat and moisture transfer over these deep warm features during the passage of tropical cyclones, which often intensify over the basin and can reach severe status (e.g., Ivan, Matthew). 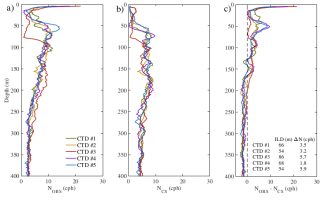 Click to enlarge
(a) Buoyancy frequencies (NOBS) in cycles per hour calculated from in situ temperature and salinity. (b) Buoyancy frequencies (NCS) calculated from same in situ temperature as (a), but with a mean salinity profile (S = 35.5 psu). (c) Difference of (a) and (b). Dashed line indicates a difference of 0. Table shows the difference in frequencies at the bottom of the isothermal layer (ILD) of each profile. CTD #3 is within the warm eddy core, CTD #2 is on the eddy boundaries, and the others are in the Caribbean Sea background flow.

Measurements showed that the WCE has a similar thermal structure to Loop Current WCEs found in the Gulf of Mexico. Its surrounding waters, though, have deeper isotherms than those in the Gulf of Mexico. One important feature found in these observations is a barrier layer, characterized by multiple salinity layers within a constant temperature layer. This upper ocean feature, formed in part by the Amazon-Orinoco freshwater river outflow, increases upper ocean stratification compared to WCEs in the Gulf of Mexico. While both regimes may be more resistive to enhanced mixing and sea surface temperature cooling largely through the deeper warm layers, a barrier layer within WCEs in the Caribbean Sea may provide an even more favorable environment for hurricane intensification when atmospheric conditions are favorable.

To further test this hypothesis, upper ocean measurements in both WCEs and surrounding waters are needed before, during, and after tropical cyclone passage to fully capture the interaction between these upper ocean environments and the tropical cyclone. In addition to temperature and salinity profiles, current profiles are necessary to assess the vertical upper ocean mixing processes through the barrier layer and the isothermal layer. Such measurements are needed to improve understanding of these complex ocean-atmosphere interaction processes in the Caribbean Sea that are central to tropical cyclone intensity forecasts from coupled models.