Global warming seems to have paused over the past 15 years while the deep ocean has been observed in absorbing the heat instead. The thermal capacity of the oceans far exceeds that of the atmosphere, so the oceans can store up to 90% of the heat buildup caused by increased concentrations of greenhouse gases such as carbon dioxide. 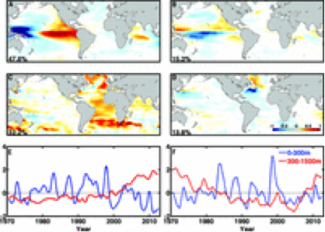 Figure: The ocean heat content in layers of 0 to 300 m (A and B) and 300  to 1500 m (C and D), respectively, in the same unit of 1019J for the global ocean. The principal component time series associated with each mode (blue for the upper layer and red for the lower layer) have been normalized by the standard deviations. Credit: Chen and Tung, 2014, Science.

New research has found that transport of heat to the deeper layers in the Atlantic and Southern Oceans (300 - 1500m) could be one of the likely causes for the slowdown in global warming. This is initiated by a recurrent salinity anomaly in the subpolar North Atlantic. The research also notes that the influence of the tropical Pacific is large on interannual fluctuations and the next El Nino event could disrupt the hiatus. However, the researchers emphasize that the role of heat transport in the Atlantic and Southern Oceans will remain intact and the haitus will continue on a decadal timescale.